A new malaria vaccine has promising results in Africa 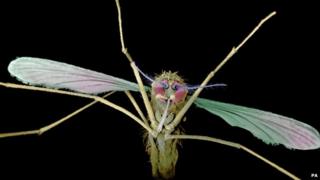 A new malaria vaccine could help save millions of children around the world.

In a year long trial, 15,000 children aged under 18 months were given the injection.

Researchers say that babies given the vaccine had about half the risk of catching malaria, compared to those who hadn't had the jab.

The trial was conducted in seven African countries on two groups of children - babies aged between six-12 weeks and infants aged five-17 months.

Vaccines are injections that contain a small amount of a particular disease, which then help the body build up defences and prevent you from catching it later on.

Andrew Witty, who works for the British company, GSK, which developed the vaccine, says the results are fantastic news.

"This data bring us to the cusp of having the world's first malaria vaccine," he said.

But some global health experts aren't too sure, saying there is still work to be done.

Although the trial vaccine helped fight malaria, it is less effective in fighting other diseases like measles.

People are also worried about who much the new treatment would cost and whether people in poorer countries would be able to afford it.

Malaria is a huge problem in the world today, affecting 225 million people a year.

Around 800,000 of these people die from the disease, many of these African children under the age of five.

The disease is carried by mosquitoes, making it a huge problem in many hot African countries.

But some progress is being made with The World Health Organization saying that there had been nearly a 20% fall in the number of deaths worldwide in the past 10 years.