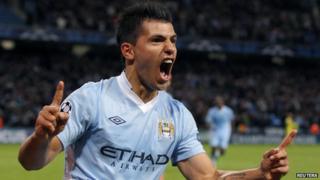 Both Manchester City and Manchester United have recorded their first wins in this season's Champions League.

Argentinian striker Sergio Aguero came off the bench to score a last-minute winner for City in their game against Spanish side Villarreal.

The injury time effort sealed his team's first ever victory in the competition.

But they had to do it the hard way, after going a goal down inside the opening four minutes.

Meanwhile Wayne Rooney returned to the Manchester United starting line-up in style, bagging two goals for his side in Romania. 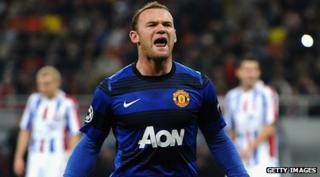 After a goalless first half, Rooney netted twice from the penalty spot to win the match and make him the highest scoring English player in Champions League history.

But it wasn't all plain sailing for the Premier League holders.

Defender Nemanja Vidic was harshly shown red for a foul just after the break.

However the clean sheet means United have conceded just one goal in their last eight Champions League away games.