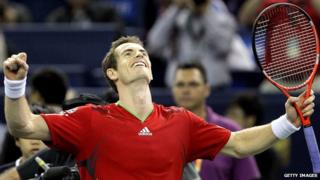 Andy Murray has moved up to world number three after winning his third successive tournament.

The Scot beat David Ferrer in the final of China's Shanghai Masters 7-5, 6-4 to take his fifth title of the year.

The victory means Murray has now moved up to third in the world rankings, ahead of Roger Federer.

"If you finish in front of Federer, then there's not many people in the last seven years that have been able to say that," said a delighted Murray.

The British number one is in terrific form at the moment, having won three tournaments in Asia in October 2011 alone.

He started his latest winning spree in Japan and followed it up a week later in Thailand, before this latest tournament in China.

He had a spell as world number two in the summer of 2009, but has never finished the year inside the top three.