Nu Vibe are voted off The X Factor after public vote 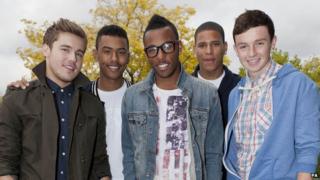 Boyband Nu Vibe have become the first act to be voted off The X Factor by the public.

The group ended up in the bottom two with solo star Frankie Cocozza after Saturday night's performances.

It was then left up to the judges to decide who stayed and who went home.

Gary, Louis and Kelly all decided that Nu Vibe should be the ones to leave the show, with only their own mentor Tulisa voting for them to stay in the competition.

The five-piece band failed to impress the judges with their dance version of U2's With Or Without You, with Gary saying they had "no vibe".

But the boys promised they would stay together and keep trying to make it as a band.

Their mentor Tulisa, who put the group together at boot camp, looked very upset after the votes were made.

"I took a chance and they worked hard, they gave everything. I can't say what went wrong because I can't see it," she said.