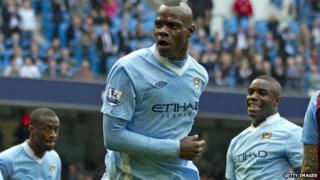 Manchester City are top of the Premier League table after a fine 4-1 win at home to Aston Villa.

Italian striker Mario Balotelli scored with a superb overhead kick to put his team ahead, before goals from Adam Johnson, Vincent Kompany and James Milner sealed the win.

The victory moves City two points ahead of closet rivals Manchester United, who drew 1-1 with Liverpool.

United boss Sir Alex Ferguson left several of his star players on the bench for the game at Anfield and it nearly cost him the game. 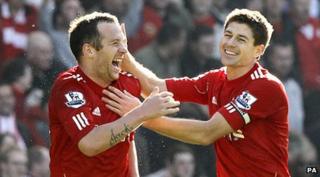 England midfielder Steven Gerrard put the home side ahead with a free kick, before substitute Javier Hernandez levelled with nine minutes from time.

Elsewhere Chelsea stayed in third position after an impressive 3-1 win at home to Everton, while Newcastle are fourth after fighting back to draw 2-2 with Tottenham.

At the bottom, Bolton moved out of the relegation zone with a 3-1 win at Wigan, but Blackburn are rooted to the foot of the table after drawing 1-1 with QPR.

In the other games Robin Van Persie scored two in Arsenal's 2-1 against Sunderland.

Norwich beat Swansea 3-1, Stoke moved up to seventh with a 2-0 win against Fulham, and West Brom beat Wolves 2-0 at the Hawthorns.