David Beckham has been approached by French club PSG 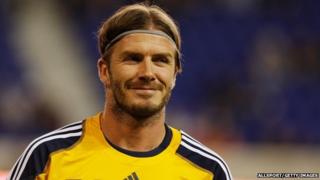 Could David Beckham be making a return to Europe?

French club Paris Saint-Germain (PSG) have made an approach to sign him, after his contract at LA Galaxy runs out at the end of December.

PSG had a phone chat with Beckham's people, but no official talks have taken place yet.

The midfielder's expected to announce his next move in November once the US Major League Soccer season ends.

The former Manchester United and England player has been at LA Galaxy since 2007.

He's been linked with several other clubs, including Queens Park Rangers and Tottenham - who he trained with in January.

But Becks hasn't ruled out staying in LA, where his family are settled.