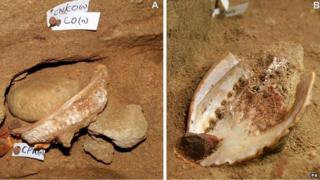 PA
Here are two of the shells discovered in the cave, that are thought to be ancient paint pots

Painting kits used by humans over 100,000 years ago have been found in a cave in South Africa.

The discovery includes red and yellow dyes, as well as shell containers that could have been used as paint pots.

Stones and pieces of bone used to make the paint paste were also discovered at the site.

Researchers say the extraordinary findings show that humans were thinking in a modern way hundreds of thousands of years ago.

Prof Christopher Henshilwood, who was part of the team, says the paint could have been used to paint bodies, leather bags or other objects.

If this is true, it shows the human mind advancing ahead of the rest of the animal world.

Blombos Cave, the site where the discovery was made, is famous for its remarkable archaeological treasures.

Scientists have been scraping down through its sandy floor for twenty years and have found several artefacts left by the Middle Stone Age people who lived there.