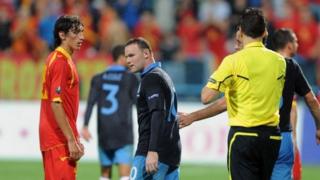 Uefa have handed Wayne Rooney a three-match ban at Euro 2012 for violent conduct after he was sent off during a match against Montenegro last week for kicking one of his opponents.

The Manchester United and England striker says he is "shocked" and "disappointed" by the ban.

Wayne will miss the group stage of next summer's European Championship in Poland and the Ukraine.

The Football Association now have three days to appeal the decision.

If they do, and its unsuccessful the ban could go up to four games.

Match of the Day pundit and former England captain, Alan Shearer says Rooney's three match ban is "a huge blow", but says he would still take Rooney to the tournament.