T-Rex dinosaur was even more massive than we thought 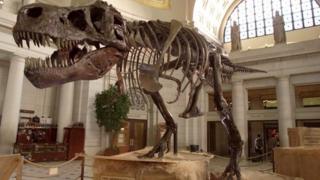 The mighty Tyrannosaurus Rex may have been much bigger and hungrier than people thought, say experts.

Scientists in England and the USA have used 3D scans to measure the size of T-Rex skeletons and found they were far bigger than people had thought.

They found that T-Rex would've weighed about 10kg when it was born, about the same as a 6-month old human baby.

But then over the next 17 years it would boom in size up to nine tonnes, about as heavy as nine small cars.

That's about twice as heavy as experts had thought up to now.

The old way to figure out dinosaur sizes was to build scale models, but now the 3D laser scans have made the measurements far more accurate. 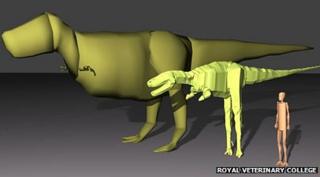 Other
New 3D images show old and young T-Rexes next to a human.

Because the T-Rex skulls were so huge, the team had to borrow special scanners normally used by Chicago Police and the Ford Motor Company in America.

Dr John Hutchinson of the Royal Veterinary College told us that T-Rexes "would have been extremely hungry, like ravenous teenagers".

He said he now wants to find even more fossils to prove that T-Rex was even bigger and heavier than nine tonnes.