Piranhas use a barking sound to warn off rivals 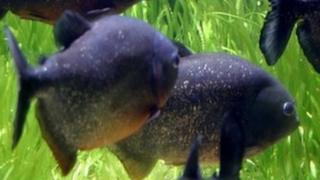 Scientists have discovered that piranhas "bark" more than they bite.

Researchers have found out that piranhas use sounds to communicate with each other - usually to scare their rivals rather than attack them.

With underwater microphones, scientists recorded the sounds the fish made when they met head-to-head.

The boffins discovered that each of the three sounds they made seemed to contain a different "message".

The first one was a bark that the fish made when they confronted one another but they weren't fighting.

Another noise was like a drum beat, that the piranhas made when they chased one another.

They made a third, softer sound when they bit each other. The fights were usually about food.

The research team already knew the fish made noises, but they're now trying to find out why.

They now hope to go and see the fish in their home on the Amazon river to find out more about the noises they make.