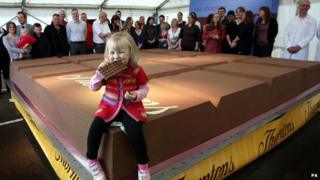 Chocolate lovers, feast your eyes on this - it's officially the world's largest ever chocolate bar!

More than 50 staff helped to create the huge sweet at a factory in Derbyshire.

The massive bar is four metres wide and long. It'll now be smashed up into smaller pieces and sold off for charity.

Volunteers spent 10 hours pouring buckets of chocolate into the huge mould at a factory.

The record attempt idea came from a staff member from the toffee department, Paul Bell, who was inspired by his favourite childhood film Charlie and the Chocolate Factory.

He said: "There was a scene in it where a massive chocolate bar comes in and gets shrunken. I thought it would be great if we could do the reverse."

The final weight of 5,827 kg beats the previous record set by a company in Chicago, America, in September.