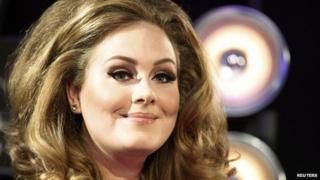 Adele has got four nominations for this year's American Music Awards.

Even huge American pop stars Lady Gaga, Rihanna and Katy Perry are right behind her with three nominations each.

She's up for best rock and pop female, best album for 21 and best contemporary artist.

And if that's not enough, she's also ready to battle Taylor Swift, Katy Perry, Lil Wayne and Lady Gaga for artist of the year award.

It's good news for Adele, because just last week she had to cancel her tour in America because of problems with her voice. She said she was "heartbroken and worried" about it.

Other singers hoping to take home awards are Justin Bieber and Bruno Mars who are up for favourite pop and rock male artist.

The awards ceremony will be held in Los Angeles on the 20th November.