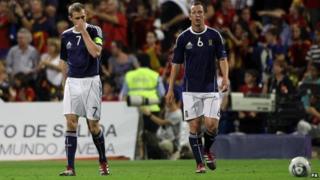 Scotland's Euro 2012 qualifying campaign ended in disappointment when they lost 3-1 to defending champions Spain in Alicante.

The Scots had to better the result of the Czech Republic to qualify, but the Czechs thrashed Lithuania 4-1.

"It doesn't get much harder than playing the European and world champions at their ground," he said.

Elsewhere Wales' Euro 2012 campaign ended in another victory as they beat Bulgaria 1-0 in Sofia.

Northern Ireland were defeated 3-0 by Italy in Pescara.

It wasn't all bad news, The Republic of Ireland managed to clinch a play-off spot, with a 2-1 home win over Armenia.