The return of the 'extinct' bee? 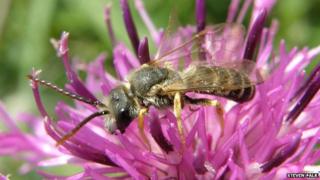 A species of bee which was believed to be extinct in Britain has been found 65 years after it was last seen.

However, the report was not all good news for Britain's bee population, as the country's largest mining bees are risk of losing their habitats.

Several of the plants that mining bees feed on are decreasing in numbers and therefore endangering the bees' lives.