X Factor judges vote off four of their own acts 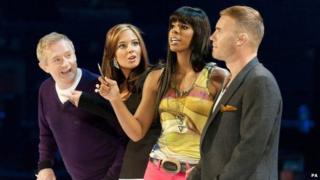 It was a tense night for X Factor fans on Sunday as judges were forced to vote off their own acts.

After watching all 16 artists perform on Saturday's first live show, each judge had to pick one act they were mentoring to send home.

The acts to get the boot were 2 Shoes, Amelia Lily, Jonjo Kerr and James Michael.

It was a tough decision for Tulisa in particular, who broke down in tears as she sent home her girl group 2 Shoes.

She said she'd made up her mind just half an hour before going on stage and that the Essex duo were like her "mates".

Despite Sunday night's twist, the number of people watching the programme was the lowest it has been in three years.

It has been criticised by many for being too long, while others have said it has too many advert breaks.