Rooney sent off, but England still through to Euro 2012 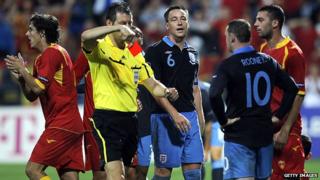 England booked their place at Euro 2012 with a scrappy 2-2 draw in Montenegro - but Wayne Rooney was sent off and will miss the start of the tournament.

Rooney was sent off after 71 minutes for kicking out at opponent Miodrag Dzudovic, with England leading 2-1.

But the ten men couldn't hold on, conceding a last minute goal to draw.

Rooney will find out how many games he's banned for when Uefa make their decision on Thursday.

Elsewhere, Scotland beat Liechtenstein 1-0, meaning they're still in with a chance of qualifying for the Euros next summer. 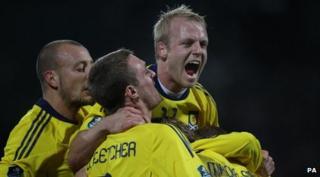 Scotland are second in the group, just one point ahead of closest rivals Czech Republic, with only one game left to play.

Everything will be decided on Tuesday night when Scotland face world champions Spain and Czech Republic play Lithuania.

Craig Levein's side must do better than the Czechs' result in order to finish second in their group and qualify for the play-offs.

There were mixed fortunes for the other two home nations.

Wales enjoyed an impressive 2-0 win against Switzerland, but Northern Ireland lost 2-1 at home to Estonia - neither nation can now qualify for next year's tournament though.

Northern Ireland's manager Nigel Worthington has since decided to resign from his position after Tuesday's game against Italy.