This week in CBBC's Sarah Jane Adventures, Clyde is left abandoned on the streets of London. But what's it really like to sleep rough - and not have a roof over your head?

For the first of some special reports on being homeless, Hayley found out what it's like spending a night on the streets.

Homelessness in the UK

For 32 hours, Hayley's lived and slept rough in London, with no belongings except for a sleeping bag and the clothes she was wearing.

Here's Hayley's snapshot of what happened...

Quite a warm morning, but it's very quiet on the streets of London.

Two hours in and it's just got busy on the streets of London. Just had to use the public toilet - I'll have to get used to that for the next 30 hours.

Just met one of the support workers at Centrepoint and heard about the amazing work they do helping homeless kids get off the street.

They give them food and shelter and try and get them back into school or college.

I've just met a homeless boy called Tom. He was such an inspiration as he has slept on the streets of London for nine months. He said it was cold and scary, but he's now being helped by the charity Centrepoint to get back into education and hopefully get a flat of his own soon. Good luck Tom.

It's lunchtime now and I'm pretty hungry. But there's nowhere I know of that gives food to homeless people until this evening. So I'll just have to stop being a wimp and keep on walking around the streets. Just stop flaunting your sandwiches and coffees, people!

I've now been up for over 10 hours and have spent most of that walking the streets. I'm pretty tired!

12 hours of being homeless and what's really struck me is how tiring it is when you have nowhere to go and feel safe.

It's got quite windy and cold on the street now, but only an hour to go till I get some dinner at The Connection - one of the largest homelessness organisations in the UK.

In a queue with about 40 homeless dudes in London... Can't believe how many people are without a home here.

Massive respect to all the people at The Connection tonight who were taking care of homeless people on the street! And thanks for my sarnie!

Pretty cold under this bridge, cardboard boxes and sleeping bag aren't as warm as imagined! But so tired, think I could sleep anywhere. Night night. 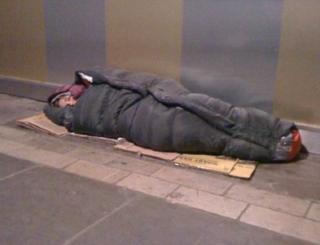 Made it through the night after being homeless 24 hours! I'm sore and hungry. It wasn't the best - even saw a rat!!!

Millions of thanks to Holli and Alex from Team Newsround who stuck with me through last night! Not long to go! 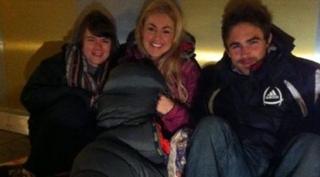 My stint being homeless is finally over. I'm tired and achy and I think I smell pretty bad.

It's been really tough, last night especially, as it was uncomfortable and a bit scary, I even saw a rat next to where I was sleeping... Gross!

But while it was awful for me, it's nothing compared to what young people who are actually homeless are going through. I know that now I can go home and get a nice shower and get in a clean bed. They have nowhere to go and they don't know when it's going to end.