Leaking oil has reached the shore in New Zealand 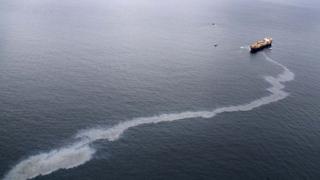 Oil leaking from a stranded ship has reached the shore in New Zealand.

The container ship started leaking when it hit a reef in the Bay of Plenty last Wednesday.

The area is one of the country's most popular tourist spots and rescue teams are racing to get the oil off the ship before more escapes.

The spill has left a three mile oil slick and it's already harmed some Little Blue penguins and other sea birds.

Between 20-30 tonnes of oil have leaked so far and two barges are scooping it up.

Authorities say fist-sized balls of oil were found in one of the area's main beaches, which was then closed.