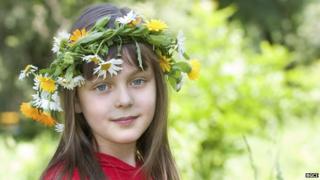 Youngsters from around the world are being encouraged to enter a garland making competition for the 2012 Olympic Games.

Garlands are head decorations made out of flowers and leaves.

Children are only allowed to use flowers that originate from their own country to make their pieces.

Winning entries will be on display in London next year while the city plays host to the 2012 Games.

So far 15 botanic gardens around the globe have signed up to competition - including ones in Australia, Canada and the US.

And the idea is to get lots of schools here involved too.

The Olympics have used plants as a means of celebration for over 2,700 years.

When the Games first started in ancient Greece, winning athletes were crowned with olive branches, but now they're presented with bouquets of flowers.

The competition, ran by Botanic Gardens Conservation International, closes at the beginning of April 2012, with the overall winners being announced in May.