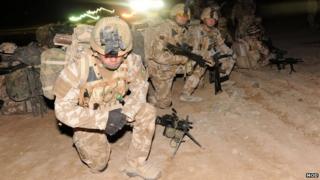 British armed forces in Afghanistan are part of the Nato-led International Security Assistance Force, which is normally called Nato-ISAF.

The British soldiers work with troops from many other countries.

Nato-ISAF's job is to help the new government by doing things like: