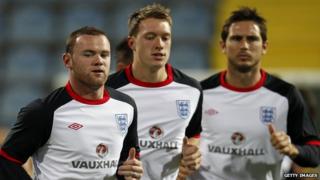 Friday night is a big night for footie fans with three of the home nations in action looking to qualify for Euro 2012.

England have travelled to Podgorica to take on Montenegro.

The England coach, Fabio Capello has urged his players to be focussed tonight in their bid to clinch a place at Euro 2012.

England need a point but Capello says it would be mistake to play for a draw.

With their qualification hopes almost certainly over, Northern Ireland take on Estonia at Windsor Park.

Wales are bottom of their group and are seeking a first win in five attempts against Switzerland.

Jack Collison and Andy King have joined Joe Ledley on Gary Speed's injury list ahead of the game at the Liberty Stadium.