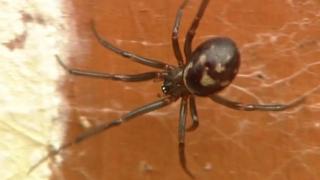 A nest of dangerous false widow spiders has been discovered in Milton Keynes, Buckinghamshire.

And although pest controllers have safely removed the nest, they've told local residents to be on the lookout for more.

The eight legged creepy crawlies aren't deadly, but they do have a nasty, poisonous bite.

One person has already been sent to hospital with chest pains after being bitten by a false widow.

The small creatures are related to the very poisonous black widow spiders and look quite similar to them too.

They even make the same kind of webs, but the big difference is that black widow spiders have a bright red spot on their body.

Unlike the ones found in Milton Keynes, black widows can occasionally kill people.

But don't worry - they're not found in the UK, as it is too cold for them here.

They're much more likely to be found in warmer countries like Mexico, Australia and the USA.