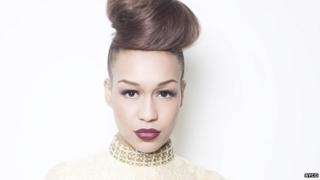 The song is called Nothing's Real But Love and is out on 27 November, with her debut album following a week later on 5 December.

The 24-year-old finished second in 2010's X Factor, losing out to the winner Matt Cardle.

Rebecca said she can't wait for the everyone to hear the song and "loved writing and recording the album".

The song was co-written by Rebecca and has been described by her record label as a modern soul song.