Halloween: Top tips to win at trick or treating

Halloween is the scariest night of the year! It is celebrated on 31 October.

It's when lots of people go trick or treating, dress up and enjoy getting scared.

But why do we like it so much and how can you make the most of the spooktacular night?

Keep reading to find out everything you need to know about Halloween.

Love Halloween? Check these stories out

Send us your Halloween costume photos!

Trick your friends with this gory Halloween make-up!

How to do simple face paint skeleton 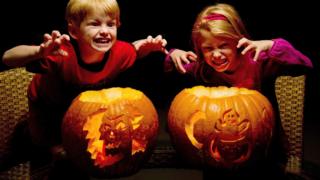 First up - plan your route! If someone's dressed their house up for Halloween, they're definitely into it and they're the ones with the goodies behind the door.

Go get 'em - with a responsible adult of course!

Once you've done that you can try to charm them because the mission is to bag as many treats as possible, right?

All of us at Newsround HQ don't bother with the trick part, instead we make sure we empty all the previous sweets out of our buckets so that people feel sorry for us and we gets more sweets.

And finally dress up - your costume has got to cut it. You want some good reactions on the door so make an effort and don't just put your hood up - these guys don't owe you treats!

How to spook your friends at Halloween

There are some simple things you can do with your friends to give them a fright:

1. Get everyone to pose for a selfie and when you're all quiet and smiling ready for the snap, let out a scream - you're friends won't be expecting that.

2. Try making a scary face and moving your arms and legs in a scary way.

3. Creep up to your friend and suddenly whisper in their ear when they're least expecting it.

But remember don't go too far with your pranks - not everyone likes getting scared and you don't want them to get upset by what you do.

Where does Halloween come from?

One of the most interesting things about it is that nobody knows for sure where it came from.

It is widely recognised as an American holiday, but it is believed the tradition of Halloween actually dates back to Britain many centuries ago, with its roots in an Iron Age Celtic festival called Samhain - although there are historians who dispute this.

Samhain (pronounced 'sow-in', which means 'summer's end') marked the end of the harvest season and the beginning of winter.

It is said that, at that time of the year, ghosts came back to visit the living and that the barrier between the two worlds - the living world and the spirit world - was thinner, so spirits could cross it.

While people expected some ghosts and didn't mind their visit, they feared the presence of evil spirits and disguised themselves using scary costumes. People would also light bonfires to try to scare them away.

How is Halloween celebrated around the world?

What does a teal pumpkin mean?

Samhain was a three-day Celtic New Year festival that began on 31 October, so the timing and the links with ghosts gives historians a reason to suspect this may be where it came from.

But the Celts did not leave written records, so it is difficult for anyone to be completely certain.

In the mid-8th Century, Pope Gregory III moved the date of All Saints Day from 13 May - the date of the Roman festival of the Dead - to 1 November, in the middle of Samhain.

This brought All Saints' Day - a Christian festival of the holy dead on 1 November - in line with Samhain, and the 31 October became known as All Hallows' Eve.

The name Halloween - or All Hallows' Eve - comes from the Old English word halga or which means 'holy'.

In 1845, the Great Potato Famine forced around one million people living in Ireland to move to the US, taking traditions like Halloween with them.

It was in America that the pumpkin became the vegetable that we all associate with the festival. In the UK, people used to carve turnips! 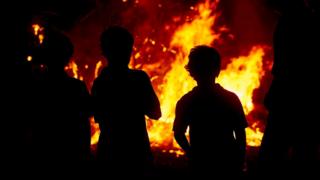 Getty Images
Even now, some people might celebrate Halloween by having a bonfire party

According to Professor Candida Moss, who is an expert on early Christianity: "As a festival, Halloween has many faces.

It memorialises the lifting of the veil between the living and the dead, it celebrates the harvest season, it marks the end of summer and the beginning of autumn, and - with the changing seasons - it recalls the souls of the dead.

"Determining where Halloween comes from depends a great deal on which aspect of Halloween we choose to emphasise."

What happens on Halloween?

Everyone may celebrate Halloween in different ways, but some of things you might expect on 31 October include:

Not everyone likes celebrating Halloween, though. Some religious people believe that making a game out of evil spirits is wrong.

Halloween: How to do a simple face paint wound