Robbie Williams leaves Take That for the second time 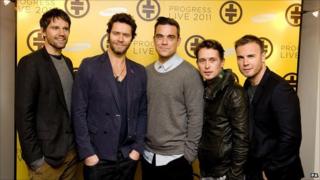 X Factor judge Gary Barlow has revealed that Robbie Williams has left Take That for the second time.

But this time around, it seems that the boys have parted on good terms.

With their tour over, the band are taking a break while Gary concentrates on The X Factor live shows and Robbie works on his new solo album.

"We got on well. Now Rob's doing a solo record and from this point it's back to where it was," Gary said.

So for now, Take That are back to being a four-man outfit.

But Gary insists this most recent split doesn't mean the end of the band.

"You know what, we can revisit it whenever we want," he said.

"He's our brother, Rob is, and if he's ever in trouble or he wants to have a year off being Robbie Williams, he's welcome any time he wants."

Robbie Williams rejoined Take That last summer, having first walked out of the band in 1995.

The multi-Brit Award winners went on tour as a fivesome for the first time in 16 years.

They played eight dates at Wembley Stadium across June and July earlier this summer, which made a record-breaking £38 million.