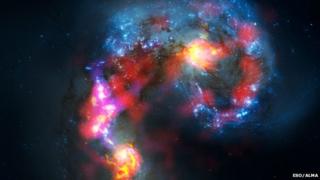 The very first pictures from the world's largest telescope have been released.

The giant telescope, called Alma, is able to study things in space that happened hundreds of millions of years ago.

The images show for the first time what it looks like when two galaxies collide with each other.

Scientists hope they will eventually be able to see pictures from the very beginning of the Universe. 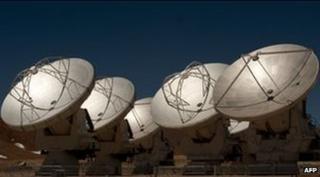 Alma is based at the highest point of the Atacama desert in the South American country of Chile.

It is currently made up of 20 huge, white dishes called antennas that point up to the sky.

Over the next two years though scientists are hoping to add another 46 antennas to help them study stars and planets in even greater detail.

Experts are very excited about these new pictures because they will be able to learn so much more about our Universe.