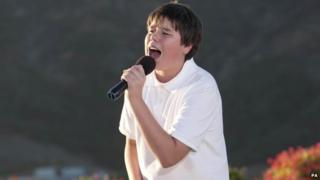 X Factor judge Gary Barlow has reportedly said that some 16-year-olds are "too young" to cope with the pressure of the TV talent show.

Viewers saw teenager Luke Lucas break down crying after he made mistakes in his performance at the judges' houses stage of the competition on Sunday.

He told a newspaper: "Some 16-year-olds are more mature than others. Luke is just too young."

During the show Gary and his Take That bandmate Robbie Williams watched 16-year-old Luke sing Impossible by Shontelle.

But Gary asked him to restart the song after he sang too quickly.

"I have a responsibility here as well," said Gary.

"It was too much for him - no wonder he cracked under the pressure."

Contestants for the talent show have to be aged 16 or over, and an X Factor spokesperson said that the younger singers had an adult with them at all times.

The 16 finalists were revealed this weekend: they included Amelia Lily and Janet Devlin, who are both 16.

There was also a surprise as judge Tulisa picked four members from two separate groups to form a new group called The Risk.