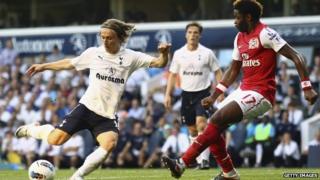 Tottenham and Liverpool were the big derby winners in this weekend's Premier League games.

Meanwhile in the Merseyside derby Liverpool moved up to sixth in the table with a 2-0 win at Everton.

Andy Carroll and Luis Suarez scored, but Everton played most of the game with ten men after midfielder Jack Rodwell was sent off.

Elsewhere, Manchester United stayed top of the league with a 2-0 win over newly-promoted Norwich City.

Brazilian midfielder Anderson headed in the first goal, before Danny Welbeck grabbed a second later on. 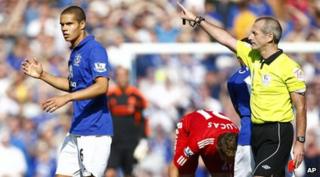 Manchester City proved they are not missing Carlos Tevez as they thrashed Blackburn Rovers 4-0.

In the other games this weekend, Chelsea beat Bolton 5-1, Fulham won 6-0 against QPR and Newcastle are third after a 2-1 away win at Wolves.

Sunderland and West Brom drew 2-2, Aston Villa remain undefeated in the league after a 2-0 win against Wigan and Swansea beat Stoke 2-0.