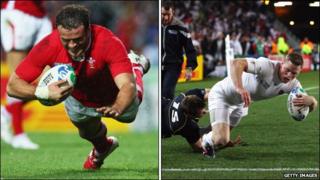 England and Wales have made it into the Rugby World Cup quarter-finals in New Zealand.

Wales stormed through their last group game with a 66-0 win against Fiji.

England put Scotland out of the competition by beating them 16-12.

Wales will play Ireland and England take on France on Saturday 8 October.

England though looked pretty shaky in their match, only winning it with a last minute try from Chris Ashton.

In the other quarter-final matches New Zealand are set to play Argentina and South Africa will be up against Australia.