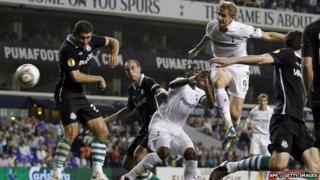 It was a great night for British clubs in the Europa League, with four out of the five teams in action winning their matches.

Tottenham came back from being a goal down to beat Irish side Shamrock Rovers 3-1 at White Hart Lane.

Stoke City were also behind to Besiktas at the Britannia Stadium, but recovered to win 2-1.

Fulham and Birmingham City were also winners, while Celtic drew 1-1 at home to Udinese.

Fulham beat Danish side Odense, 2-1, while Birmingham City scored a valuable 2-1 away win in Slovenia against NK Maribor.