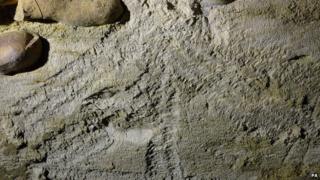 Experts believe that some prehistoric cave etchings found in France were made by kids as young as three.

The drawings of horses and rhinoceros were discovered at a cave in Rouffignac, in south-west France.

They were made by people running their hands down the soft surfaces of walls and roofs.

Researchers have found a way to identify the age and gender of the artists, and reckon a lot of the art was done by a five-year-old girl.

Archaeologist Jess Cooney said: "We have found marks by children aged between three and seven-years-old - and we have been able to identify four individual children by matching up their marks."

The etchings were found next to other cave art that date backs 13,000 years.

But experts aren't sure whether the art was made as part of an initiation ritual or if it was just something that kids did on a rainy day.

The art, which is also known as finger fluting, has also been discovered in other caves in Spain, New Guinea and Australia.