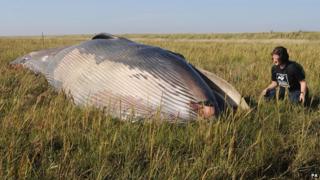 A whale that died after beaching in the Humber Estuary in north England was probably a sei whale - a species rarely seen near the British coast.

Experts examined the 10m long animal and said they were "95% certain" it was a young female sei whale.

They also said they'd seen a rise in whale sightings this year.

But no-one was sure why there might be an increase in these mammals in the North Sea.

The wildlife trust said this sei whale had been in shallow water, touching the sea bed, about 800m offshore.

"When it gets in that situation it rolls onto its side and it can cover its blow hole. It is sad but we will be able to learn a lot from it."

There have been a lot more sightings than usual of whales and other marine mammals on the east coast of England this year.

The Wildlife Trusts are asking members of the public who do see whales or dolphins to report the sightings to their local Wildlife Trust or to the Sea Watch Foundation.