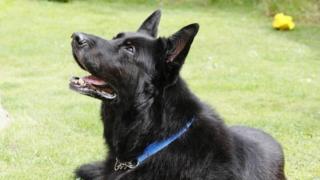 A German Shepherd dog who appeared in Harry Potter and the Prisoner of Azkaban needs a new home.

Shadowberry is 10 years old and appeared as Padfoot, the animal incarnation of Sirius Black.

His owner used to be a stuntman for the movies but now he doesn't have enough time to look after Berry properly.

So Berry has been put up for adoption and is hoping a suitable new owner will come forward.

He lives with Porridge, a 13-year-old German Shepherd, who has also starred in films. They're best friends and have to be adopted together.

Lizzy Brown from the German Shepherd Rescue charity says they've had lots of inquiries about the dogs, but they're still waiting for the perfect home.