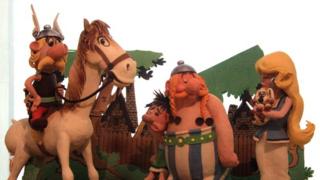 The man behind the popular Asterix cartoons has retired after 52 years of drawing the famous comic hero.

The Italian illustrator Albert Uderzo is handing over the reins to a younger artist.

The adventures of Asterix and his pal Obelix have been made into films, translated into more than 100 languages and have sold over 350 million copies.

The next Asterix film to be released will be Asterix and Obelix: On Her Majesty's Service (God Save Britannia), in 2012.