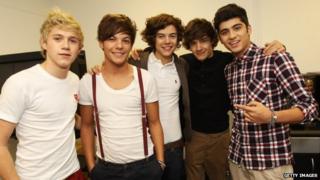 One Direction have announced they're heading around the country on their first ever UK tour.

The X Factor finalists will play 24 concerts starting in December.

The boys are doing really well at the moment, with their first single What Makes You Beautiful becoming the fastest-selling record of the year.

Harry, Liam, Niall, Louis and Zayn posted a video on their website saying they are "very excited".