Chat: Is it right to dig up a shipwreck for treasure? 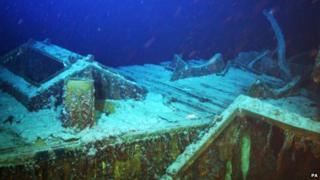 The biggest ever treasure haul of precious metals has been discovered at the bottom of the Atlantic Ocean.

It's in the wreck of UK cargo ship SS Gairsoppa which sunk in 1941 - and sadly most of the crew on board didn't survive.

More than 200 tonnes of silver is still on board and it's now going to be dug up - but is that the right thing to do?

Is it best that we dig it up and find out more about the ship and its sailors - a tribute to SS Gairsoppa and its crew?

Or should the shipwreck be left as it is in respect of the sailors who died there?

Whatever you think, we want to know. Get typing!

"Why not dig it up? It's not going to do any harm, the only thing that will happen is that some people might be slightly richer. What is the problem?"

"To be honest I think we we should dig it up because we can find out about more that has happened!"

"I think it would be a good idea to share it with the world step by step. First of all take some photographs and put it in a museum. Then if people agree to move it, display it in that museum but in an underwater tank so people can see it the way it was in the sea."

"I think it should be kept under the water because it's like a grave for the captain and soldiers!"

"I don't think people should dig it up because it is a good memory for the people who died and it is a reminder of what happened in WWII."

"I think it's right, because we could dig it up, clean it and put in a museum, so everyone could see it and honour the people who died."

"I think that the shipwreck should stay in the sea. It's almost a gravestone for the brave soldiers who died. Nobody would like it if you lifted up their grave and I don't think that taking the ship out of the water would be the best thing to do."

"I don't think we should be digging up this ship, it would be an insult to the memory of the brave men who died fighting and bringing supplies during World War 2."

"I don't think it's right for people to go on a shipwreck and take sailors' possessions or treasures. They should leave things how they've been left for many years."

"I think that they should leave it where it is as a reminder for future generations to know about WWII."

"I think that the treasure should be left underwater because if we bring it to land then everyone will want a share and the people who found it might get all the money and waste it, when it should just be left underwater or somewhere where everyone can see it!"

"I think the precious metals should be left down there because it is like a memorial to those who died when the ship sank. It's also like leaving flowers on the grave of the people who were on board SS Gairsoppa."

"Ethan thinks it's a good thing because maybe money made from the treasure could be given to poorer people. Molly thinks it's a bad thing because people have memories that are sad so people may get upset by talking about sad times. Some also felt those people who died should be respected."

"My opinion is that the shipwreck should be left as it is a grave and it isn't respectful to dig up the graves of the people who died in this tragedy."

"I think it's right, because if you dig it up then it can be made into a museum and really honour the ones who died. We can also learn about what really happened and other interesting stuff."