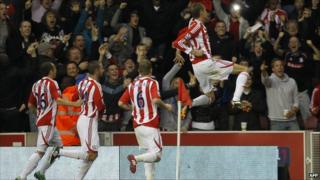 Manchester United dropped points for the first time this Premier League season, after drawing against Stoke.

Nani scored for United after 27 minutes, but Stoke came back with a Peter Crouch header in the second half to level the match.

Both teams had good chances late on, but Stoke held on for a well-deserved 1-1 draw.

The result was the only surprise in the Premier League weekend action, which included wins for Man City, Chelsea, Arsenal, Liverpool, Tottenham and Newcastle.

United stay top of the league on goal difference, but they're now level on points with arch-rivals City.