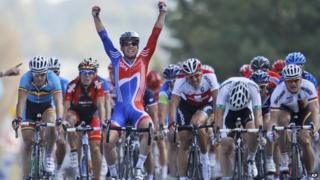 He completed a near-perfect race in Denmark with his eight-man team, which included double Olympic gold medallist Bradley Wiggins.

Cavendish sprinted across the finish line of the 165-mile course ahead of Australia's Matt Goss and German Andre Greipelt on Sunday.

The British team finished on top of the World Road Cycling medal table.

After the race, Mark said: "I can't believe it. We put a plan together to put these best guys together. It's been three years in the making and as you just saw they rode incredibly."

He's now looking ahead to London 2012 and added: "I hope we can make it a world and Olympic double."