Rare bird blown off course and spotted in Scotland 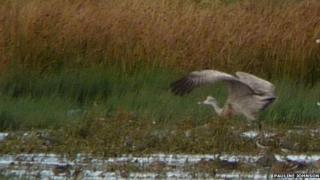 A bird which is hardly ever spotted in the UK has appeared in Scotland.

It's called a sandhill crane. It's a similar size to a heron, and has a bright red forehead and a long, dark, pointed bill.

Animal experts think the bird might have been blown off course by Hurricane Katia as it migrated south for the winter.

It's only the fourth crane of its kind to be recorded in Britain.

The species normally breeds in North America and Canada, migrating south when the cold weather arrives.

The RSPB says there's no way of knowing when it will leave Scotland or where it will go next.