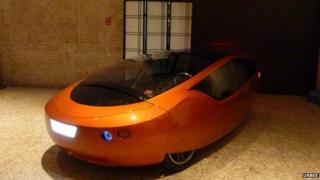 A car that was created using a 3D printer has gone on show in Canada.

The printer uses a computer model of the car, called the Urbee, to build up the real-life object layer by layer.

3D printers have already been used to make chocolate and bicycles but this is the first time they've been used for cars.

The technology is better for the environment because it's less wasteful.

The Urbee is also powered by renewable fuel and solar panels, which makes it really green.

At the moment, only the outside of the car is printed, but engineers hope they'll soon be able to print the whole thing.