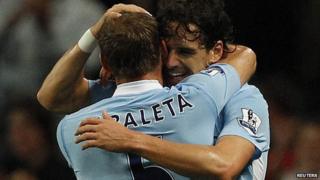 Owen Hargreaves marked his Manchester City debut with a goal as his new team beat holders Birmingham City in the League Cup.

After leading City to the 2-0 win, Hargreaves said: "I feel good.

"It's my first real game action in, I think, three years and four months... [But] I put in a lot of hard work in the summer."

Elsewhere in the competition, Liverpool went through to the next round with a 2-1 win over Brighton.

Liverpool captain Steven Gerrard made his comeback after six months on the sidelines to see his team through.

And in London, Bryan Ruiz missed the crucial spot-kick as 10-man Chelsea moved into the fourth round with a penalty shootout win over Fulham.

There were also wins for Everton, Southampton and Cardiff.