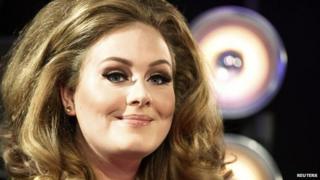 A music shop in Ireland has banned customers from playing Adele's songs.

Staff at the shop, Opus II, said musicians testing out the keyboards were playing the singer's hit single, Someone Like You, over and over again.

They finally got so fed up they put up a sign banning customers from playing any music by Adele.

Assistant manager Joanna Corscadden said: "After hearing the same song played about four to five times in about half an hour, one staff member put up a sign stating 'strictly no Adele'."

Adele is the first UK artist to sell three million albums in one year.