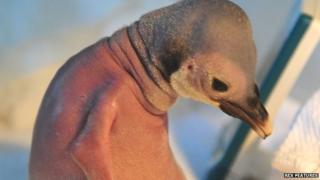 A featherless penguin, abandoned soon after birth, has been accepted back into its family thanks to aquarium keepers in China.

The little animal was born in August, but was weak and had no feathers.

Staff at its aquarium thought this was because it was having problems digesting food and absorbing nutrients. They hoped its family could help.

The aquarium said: "In the beginning we tried to send it back to its parents, hoping they would still take care of it and help it grow stronger. But they neglected it and even kicked it out."

So keepers decided to feed it themselves and set up a group to care for the youngster around the clock. 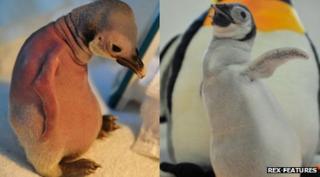 Rex Features
The penguin looked sad when abandoned, but now with feathers it's smiling.

After a month of hand feeding the little penguin was much stronger and even grew feathers.

It was then re-introduced to its family group and to everyone's delight was accepted by them!