Appeal to save man sentenced to death in America 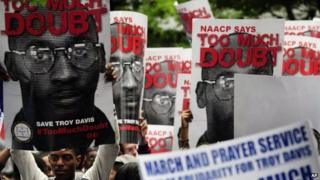 People have been holding vigils in support of a man who has been sentenced to death in America.

Troy Davis was found guilty of killing a police officer in the state of Georgia more than 20 years ago.

He is due to be executed late on Wednesday but today his lawyers appealed to the courts to change the sentence.

He denies commiting the crime and around the world millions of people have been campaining to save him.

Davis has spent the last twenty years on death row - a special section in some US prisons where people who've been found guilty of the most serious crimes are sent.

He's due to be executed by lethal injection, which is supposed to one of the most painless ways of killing someone.

In America, the legal system is different to the UK. In many states, the law says that the punishment for people who commit serious crimes, like murder, can be death.

Britain stopped using the death penalty back in 1969, and today no European country has it.

Europe opposes any use of the death penalty, whatever the circumstances. But it is still used in many other countries round the world including Iran and China.