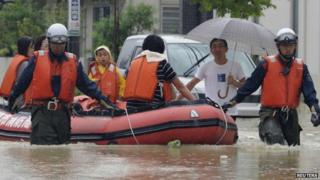 A powerful typhoon has struck Japan and is now heading north, towards areas devastated by the earthquake in March.

Typhoon Roke hit the capital city Tokyo early on Wednesday, killing four people and forcing millions of others to leave their homes.

The storm's now moving towards the Fukushima nuclear power station which was badly damaged by the tsunami.

It's possible radioactive water from the damaged plant could be washed out to sea.

Workers are trying to secure the plant before the storm arrives to stop the poisonous water from escaping.

Winds at the centre of the storm have reached 100mph and in some parts of the country 50cm of rain has fallen.

Schools in Tokyo closed early because of the heavy winds and rain; more than half a million homes have no electricity.