Has a broken bone stopped you from doing something? 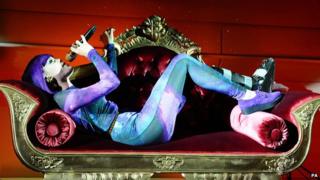 Bad news for Jessie J - her foot still hasn't recovered from its operation so she can't go on tour with Katy Perry.

Has a broken bone or injury ever stopped you from doing something? Maybe you couldn't go on a school trip or to a friend's party?

Were you disappointed or did you find something else to do instead?

Whatever it was, let us know. Don't let it stop you from sending in your comments!

I broke my hand when I was younger and it stopped me taking part in school activities. It also stopped me from doing P.E but I didn't mind that much.

When I broke my collar bone falling from my horse 4 years ago, I couldn't ride for 6 weeks and I missed loads of competitions.

I broke my arm a few years ago and it had to go in a cast, but that didn't stop me from doing a 5km charity run!

I fell over a drain and broke my foot and couldn't ride my horse for 7 weeks.

I broke my arm last year and had to rest it for 4 months. I couldn't go swimming with my school.

I broke my left leg by falling off a fence, I had to miss out doing athletics, cross country races, football and P.E it was horrible.

I have broken my finger and that stops me playing on my scooter! But I still have loads of fun with my friends playing football.

I broke my left wrist just before Christmas 2010 and couldn't go skiing on my holiday in Austria. I hated it!

I broke my wrist 4 weeks ago and I still can't do sport for a month.

I broke my arm on holiday once, I couldn't go swimming or rock climbing!

I just broke my jaw and haven't been to school for 8 days and I can't play hockey for a long time.

Well I went swimming with a broken leg and I had to wear a carrier bag on my leg.

I have broken my arm just below my elbow and I missed a netball match, a swimming competition and a football match.

I broke my arm one year ago and I couldn't move it for a week and a half and the good thing was that I did no writing subjects.

When I broke my wrist, by falling off the monkey bars, I missed playing for my school's netball team!

I broke my ankle when I was 10 so I couldn't go out anywhere and I had to stay in all the time. I wasn't allowed to go to the park with my friends.

When I broke my left femur when I was four years old, it stopped me from doing loads of things, like swimming and parties and school. The worst part was my best friend Ellie held a birthday party at the swimming pool, with an inflatable pirate ship, and I could only sit and watch for half an hour. It was really annoying! But at least I'm fine now!

I had a broken finger so I couldn't do P.E.

I fractured my thumb in the summer holidays and I couldn't do almost anything.

When I was little I dislocated my elbow. It was very painful and it stopped me from being myself for a while, but I soon got back to my usual bubbly self :)

I broke my arm saving a football in goal last Sunday. I can't play any sport for six weeks but my identical twin plays for the same team so he will go in goal for me.

I broke my arm on the second day of my skiing trip but without knowing I kept on skiing for five days.

I have been off school since Friday now because I broke my ankle playing rugby last week!! I am so bored being stuck at home :(

I broke the top of my left arm last year, it stopped me doing my sport, dance, gym and I missed lots of school, I had to have an operation on it.

No it hasn't, I've played rugby with 2 broken fingers and a broken nose before.

I've broken my ankle and I can't run around for 5 weeks but I still have fun with my friends and go sailing.

I broke my ankle two years ago a week before Easter. My dad and uncle took me and my cousin up a hill to roll eggs and I couldn't run after mine. I also nearly missed my confirmation.