Man Utd ease into the fourth round of the Carling Cup 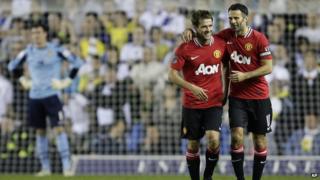 Manchester United thrashed Leeds 3-0 in the third round of the Carling Cup last night.

Micheal Owen scored twice in his first game of the season, while Ryan Giggs took a successful shot just before half-time.

Meanwhile Arsenal won 3-1 against Shrewsbury, making a comeback after Shrewsbury took a first half lead.

It was Oxlade-Chamberlain who put Arsenal ahead with a 25-yard shot.

Afterwards boss Arsene Wenger said he didn't care about the pressure on him to have a good squad following recent transfers, and that he'd like to manage Arsenal long into the future.

In other third round results Aston Villa lost 0-2 to Bolton after second-half strikes from Bolton's Chris Eagles and Gael Kakuta secured their place in the fourth round. Gabriel Agbonlahor had Villa's best chance to score but missed out when his header went wide.