Pumps open up for hydrogen cars in the UK 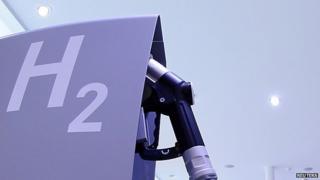 The first filling station for hydrogen-powered cars has opened in the UK.

It looks like a normal fuel stop, but instead of petrol, drivers fill up their cars with hydrogen gas.

The pumps, near Swindon, can be used by anyone who has a hydrogen car. It's hoped more stations will be built right across the UK.

Hydrogen-powered cars are better for the environment because they only produce water, not polluting gases, when they're driven.

Unlike electric cars, hydrogen-powered cars don't run on batteries that need to be recharged.

Instead they burn hydrogen gas to make electricty, which then powers the engine.