One Direction top the charts with What Makes You Beautiful 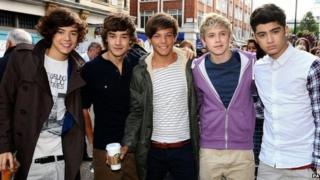 One Direction have gone straight to number one with their first ever single, What Makes You Beautiful.

It's the fastest selling song of the year, with a massive 153,000 copies bought in the first week it was released.

So many fans turned up to try to see them on BBC Radio 1's chart show that police said it wasn't safe.

The show had to be broadcast from a secret location instead. The band has said sorry to everyone who had waited.

The X Factor boyband were created during the show last year, and came third in the final.

Their first album is set to come out before Christmas.

The biggest selling album of the week was Ed Sheeran's first record called +, which went straight in at number one.