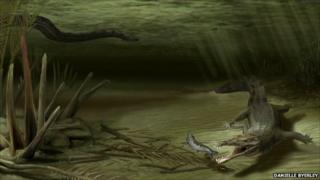 Other
The ancient environment had lots of reptiles

The fossilised remains of a huge crocodile have been found in a mine in Colombia, South America.

The massive creature was six metres long and lived in an ancient rainforest some 60 million years ago.

It's thought the crocodile was around at the same time as the world's largest-known snake - the 13-metre long Titanoboa, which was as long as a bus!

The creatures, which are now extinct, may have even competed against each other for food as they both ate fish.

The newly discovered species belongs to a group of crocs known as dyrosaurids, which spent most of their time in the sea and on the coast.